You are here: Home / Activities / Basketball

• Basketball policies and procedures, deadlines, forms, resources and more for the regular season.

MAXPREPS/ASAA365
Each member school is required to enter their schedule and update their scores on MaxPreps after each game throughout the season. Once the information is entered into MaxPreps it populates ASAA365.com. ASAA has created a helpful ASAA365 How To Guide. This “How To Guide” gives step-by-step instructions with pictures to set up your team!
• MaxPreps/ASAA365 How To Guide

ADDITIONAL TICKET OPTIONS FOR FAMILIES & BBALL ENTHUSIASTS
• 6 Flex Tickets – Adults $75 / Students $45
The 6 Flex Tickets can be used for ANY SESSIONS including the semifinal and championship! You can go to any 6 sessions, or you and five friends can go to the championship session! Flex Tickets have a value of over $100 for adults and over $60 for students! These are sold only on the first day of the 1A & 2A & 3A/4A tournaments. 6 Flex Tickets are ONLY available for purchase over the phone (907-786-1562) or in person at the Alaska Airlines Center Box Office.
• Golden Ticket – Adults $75 / Students $45
Available for either the 1A/2A or 3A/4A tournament! You don’t have to leave FOR ANY session breaks! Valid for any of the 8 sessions! Only one ticket… JUST scan and walk in!

OFFICIAL EVENT APPAREL
Northwest Designs is the Official ASAA State Merchandise Vendor. They have a large variety of commemorative items and apparel at ASAA events and online at the Northwest Designs website. 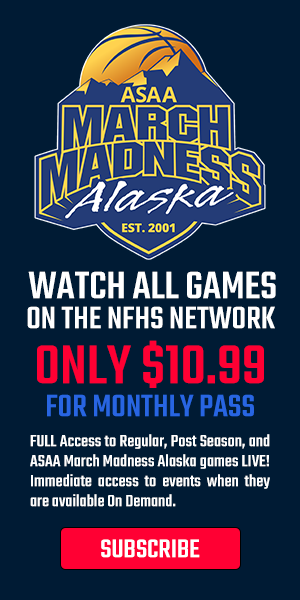